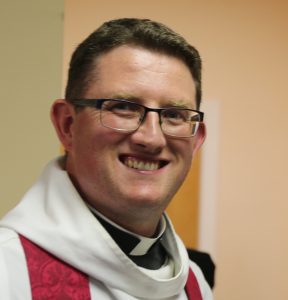 Richard was born and brought up on the border of Manchester and Cheshire. He read History at University and trained for Ordination in Cambridge before spending three years as Assistant Curate in Stockport and then seven years as Vicar of St Mary’s, Newton with Flowery Field near to Hyde on the eastern edge of Manchester. During this time he was also Rural Dean of Mottram for four years. He came to the three Churches of the Parish of St Paul, Wokingham in November 2012.

He is married to Becca (a Secondary Maths Teacher) and they have three children at Primary School and a bouncy puppy called Bramble. Dog walks and bike rides figure large in his spare time, as well as reading and going to the cinema and catching up with friends. He used to play rugby but now sticks to squash.

He is often heard saying that being a parish priest is the best job in the world because it is about God and about people, and helping people to see where God is already at work in their lives and community, and because every day is different.